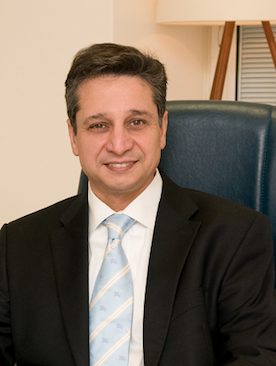 He graduated with honours from the Model School of Anavryta.

He studied Medicine at the Catholic University of Louvain in Belgium, one of the oldest Universities of Europe (foundation year 1425 b.C) where he trained next to eminent professors of the world’s medicine, like Ch. De Duve (Nobel Price in Medicine 1974).

In 1989 he trained in Preventive Medicine of Infants and Children at the Catholic University of Louvain.

From 1994 to 1998 he trained in Ophthalmology in the United Kingdom, at Mayday Hospital in London, Essex County Hospital and Wolverhampton and Midlands Eye Infirmary, where he acquired broad clinical and surgical experience, and accomplished rich work in research.

He followed his teachings in Ophthalmology at the Universities of Cambridge and Birmingham.

In 1998-1999 he trained in Pathology and Surgery of Adult and Paediatric Glaucoma, in the Eye Clinics at the University of Birmingham (Birmingham and Midland Eye Centre). He conducted research on innovative surgical techniques in glaucoma, which apply worldwide to this day.

Subsequently he trained in Paediatric Ophthalmology, in contact lenses, and in Refractive Surgery and participated in treatments at the Ultralase Clinic in Birmingham.

During his studies he was teaching medical students and trainees in Ophthalmology, and was offered a teaching post in Clinical Ophthalmology in the School of Life Sciences in Aston University in UK.

In 1999 he was approved for admission to the Central Professional List of Ophthalmic Medical Practitioners, by the Ophthalmic Qualifications Committee of the U.K.

After twenty years of training abroad, he returned to Greece in 2001. Since then, he runs his private practice in Athens, and operates in major private clinics of Athens.

He is the Founder and Director of The Adult and Pediatric Glaucoma Department at the Athens Medical Centre, since 2015.

His large research work has been presented in International and Greek Congresses and has been published in major medical journals.

He continues his research and publication work, and participates in Ophthalmology Congresses as Speaker, as well as Instructor in Clinical Courses and Surgical Wet Labs.

He teaches at the School of Medicine at the University of Athens, and is a Fellow at The Histology and Embryology Department.