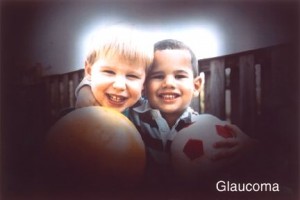 Glaucoma is an optic neuropathy that leads to loss of visual field and thus to blindness.
It is very dangerous because it does not give any symptoms. 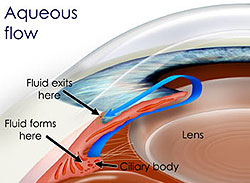 For some time we believed that the major risk factor was the increased intraocular pressure.
Recently this has changed, as we found patients with low intraocular pressures that develop glaucomatous damage, suffering from what is called Low Tension Glaucoma.

On the other hand, there are people that do not develop glaucomatous damage, despite the fact that their intraocular pressures exceed 20 mmHg. This is called Intraocular Hypertension. If these people are left with high pressure, they risk, eventually, developing glaucomatous damage.

Other factors that interfere with glaucomatous damage are the orbital blood flow, and others.

The mechanism of increasing intraocular pressure is complicated. The aqueous humor is produced by the ciliary body, circulates between the lens and the iris, passes through the pupil and is evacuated through the angle formed by the iris and the sclera. When there is difficulty of outflow, the intraocular pressure rises. This will destroy the optic nerve and cause glaucoma.

The angle of outflow may be open or narrow, and thus, the glaucomas are divided into open angle and closed angle glaucomas. Their clinical behaviour and management are different. However, thy both lead to irreversible loss of vision and visual field.

Regular ophthalmic examinations are very important, especially in open angle glaucomas that are mostly hereditairy and they need to be monitored closely.

Anyone who has a blood relative that suffers from glaucoma, needs a check-up every two years before the age of 40, and annually after that, in order to detect any early sign of the disease.

The aim of glaucoma treatment is the slowing down of the course of visual loss. Science has not yet managed to reverse glaucoma damage.

Please ask us about early detection and treatment of glaucoma.